Yep, I’m making fun of every dumb headline I see on Elle Decor online. But this little guy really did blow my mind, and still does, every time I fix my gaze upon him. But there will be no shock value today, given that anyone I’ve ever met has either seen him in photos or is forced to admire him when they come to my house. Also, he’s in the cover photo of this blog.

Here’s his story: I found him on trash day in the Bronx. A risk, I know–moths, bedbugs, demonic possession and such. I actually wouldn’t recommend getting used upholstered stuff of unknown provenance to anyone. But I was young and dumb and full of dreams. Plus he sat in the dry, alternately freezing and hot attic for years. So if anything was living in him, it died or vacated somewhere between 2008 and 2011. 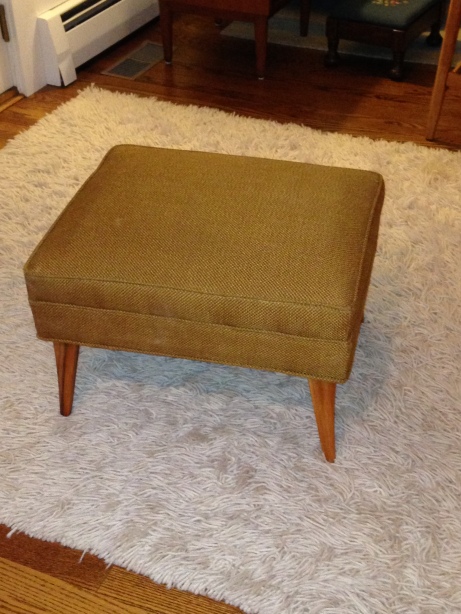 Original stool, after sanding and varnishing the legs

It was during this time that I attended an estate sale at a grim 1950s ranch house in Yonkers, where I unearthed a bolt of perfectly preserved 60s linen upholstery fabric. She cost a dollar. I paid in cash. She was so thick and vibrant I could hardly stand it. Having no use for her at the time, I stuck her in the attic. Probably a little too close to the stool.

A few years passed. (In attic years, it was more like a century.) Then, in 2011, a move to Connecticut. I reassessed all the doodie I’d accumulated, then I realized: the little stool and fabric were in love.

So happy for them, I sanded down Little Stool’s previously mud-toned legs, varnished them au naturel (it took me around an hour, total, not including dry time for the two coats of varnish), and carted Lil’ Stool and Ms. Fabric to my upholsterer friend Lefty.

Lefty is used to doing really high-end jobs. He didn’t approve of my stupid trash stool and $1 fabric, but he took them anyway. When he called me a week later and said, “Get this thing out of here!” I rushed to his store, expecting the worst, and: 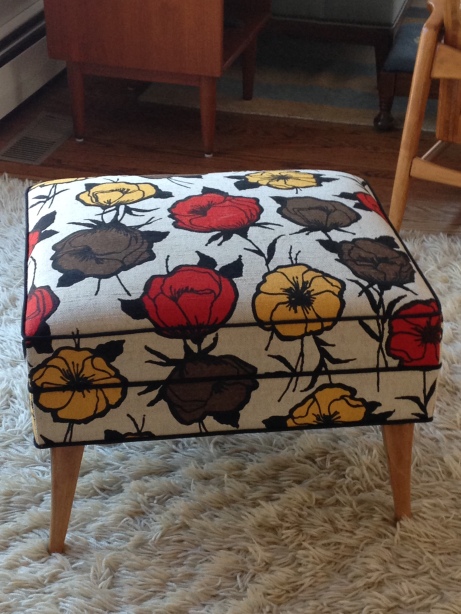 They partied hard that week. No wonder Lefty was done.

Look at this thing, healthily restuffed over its basic little bones … and notice how the flowers line up. I can see how the stool might have looked silly amongst all the grown-up $10,000 couches in Lefty’s workroom. But to me, it’s the poop-covered runt that came charging at me through a crowd of purebreds, followed me home, and grew into the most beautiful beast there ever was.