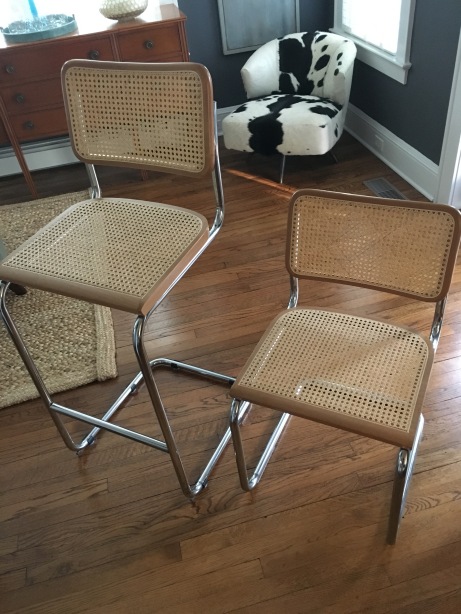 Marcel Breuer, modernist architect and designer. I recently found out his name is pronounced Broy-er, after walking around for years saying Brew-er, like a weenie.

His Cesca chair (named after his daughter, Francesca) first appeared in 1928. Breuer’s design was never patented, so there have been various manufacturers (the three main ones are Thonet, Gavina, and Knoll). It’s a hugely popular chair, yet I don’t think I know anyone who has them now except me. I remember seeing them at friends’ houses when I was young, and you can spot them in almost every 70s movie, and in any interior decorating book/mag from the 70s and 80s. Now I catch them mostly in movies where the characters live in trailers.

My dining chairs came from my friend Mark, who rescued six of them from the dump. They were a bit of a mess when I got them … the metal tubes were covered in rust and someone had blown out the caned seats doing god-knows-what. A year or two later, I found these counter stools at an estate sale, for $20 each. Same situation with the steel and the caning. 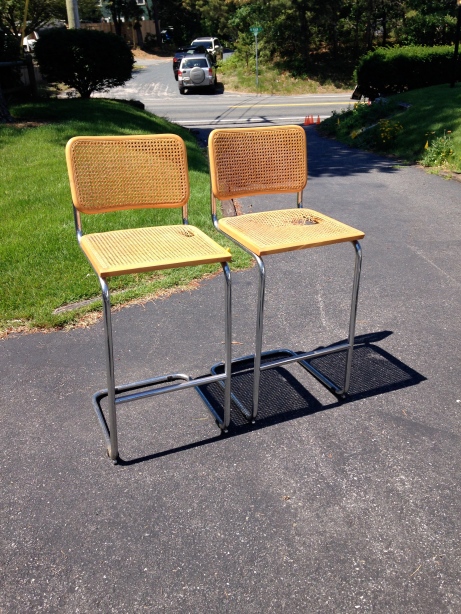 No biggie though–fine steel wool polished them right up. All that was required was a few hours of scrubbing and a strong arm. Once the steel tubes were nice-n-shiny, I sprayed them with a clear matte finish. Then I ordered new seats and backs from eBay. (They have different colors, but mine are honey oak.)

Before the Cescas, I had some sweet 1920s oak dining chairs, but anyone weighing over 180 pounds would quickly destroy them. There were also certain guy friends who would sit down in them and rock backwards, and you could hear the old wood crack and split as I looked on in horror. But none of this is a problem with the Cescas. Not only are they a great basic design, they can handle big butts, dudes who rock, and they’re totally comfortable. They also have gliders on the bottom, so there’s never a worry of damage to the floor. They’re kinda bouncy, too!

Design Within Reach sells a Cesca arm chair for $1,695. That’s for one chair. With a 16-week wait. (I found the same chair at a Montauk rummage sale for $5. Heh!) I recently spotted a whole litter of them at the Darien community thrift store, for $15 a piece. What’s the difference, you ax? Years ago, the New York Times published a piece about this very subject, and, according to their criteria, mine seem to be a mix of “authentic” (the steel tubing does not flatten at the bends; its springiness is another good sign) and cheap (the machine-caned backs and seats). So, basically, old vs. new.

As with most things in my house, I could probably lie and tell people I paid a lot for the chairs, but it’s way more fun to announce proudly that they came from the dump. But then I’ll seize any opportunity to use the word DUMP.